NEW YORK CITY FIRE BOATS
There is perhaps no other city that comes to mind first when thinking about fire boats.
The Fire Department of New York City has a very long and historic history of fighting fires
on land and the sea. The city has 560 miles of waterfront and has long been one of the busiest
ports in the world.

Over the years many major historic incidents have occurred on the waters of New York
city and every one involved the response of fire boats. While many of the wharfs, warehouses,
and ships of the waterfront are no longer, the FDNY continues to respond to a wide variety
of emergencies. The September 11, 2001 World Trade Center collapse and the jet landing
in the Hudson River are two of the more recent.

Always some of the most powerful fireboats in the world, the fleet of the FDNY was
capable of pumping in excess of between 10,000 and 20,000 gpms.
The "Firefighter" of Marine 9 is possibly one of the most powerful and famous of all
recent boats, although each boat holds its own special place in history.

Following 9/11, the department recognized the continued value of a fire boat fleet
and developed plans for upgrading the fleet to meet the needs of the future.
In the 2010 and 2011, three new and powerful boats entered service.
The older boats have either gone into reserve status or retirement.

Today, the FDNY operates the most modern and powerful fire boats in the world.
The two "big" boats, the "Three Forty Three" and "Fire Fighter II" are significantly
larger that all older boats and can pump twice the water, 50,000 gpm each!
The third boat "The Bravest" is the fastest of the fleet, cruising at 50 knots when needed.

The newest of the big boats was delivered in the Fall of 2015.
The "William M. Feehan" named for the Deputy Commissioner killed on 9-11
is a MetalCraft FireStorm 70 custom built 8,000 gpm boat
66' LOA and capable of a Maximum of 41 knots.

Thanks to those who helped me take these pictures.

"Fireboat"
Embossed in the 9/11 Memorial on the wall of Station E10 - L10
at the foot of the World Trade Center.

FOR MORE ON THE HARVEY AND FDNY FIREBOATS
WWW.FIREBOAT.ORG
Find out how you can support the preservation of this great vessel
and maybe take a ride on her!.

"Water Display"
Fire Boats are all about pumping water... lots of water!
With an unlimited supply beneath the vessel, its only a matter
of how large the pumps are and how many nozzles (Deck Guns)
are available to deliver the water where it is needed.
The 1931 retired fire boat "John J. Harvey" (Marine 2)
put on a water display at the Blessing of the Fleet
in July 2011.

"Big Guns"
The large capacity deck guns of the "Fire Fighter" and "McKean"
now in reserve / retirement at the Marine Division in Brooklyn.
July 2011

"THE FDNY FLEET"
Examples of various boats of the FDNY in 2012.
The two big boats "Three Forty Three" (Marine 1) and "Fire Fighter II" (Marine 9)
along with the "Bravest" (Marine 6), a summer boat (Marine 8) and one of the new
FDNY medical response boats (Marine 6 Bravo) during the July 14, 2012
Blessing of the Fleet in the Hudson.

In addition to these primary boats,
the Marine Division maintains Reserve Fire Boats
and a number of small and seasonal boats
(Marine 3, Marine 4, Marine 8)
to augment the division during the summer boating season.

Marine Company 1
The new "Three Forty Three" and "Marine 1 Alpha" shown at their
temporary home on Pier 40 near West Houston Street on the Hudson River
in Manhattan July 2011.
The new home for Marine 1 opened in the Fall of 2011.

FDNY MARINE COMPANY 9
The brand new quarters of FDNY Marine Company 9 "Fire Fighter II"
located on Homeport Pier near Front Street in the Stapleton section of
Staten Island opened in the Spring of 2012. The new facility includes
an newly created protective "harbor" for the Marine units assigned there
protecting the boats from the sometimes rough waters of the lower New York harbor.

FDNY MARINE COMPANY 9
The former quarters of Marine Company 9 on Staten Island.
Replaced by the new station on the pier in 2012.

"John J. Harvey"
130' Fire Boat of Marine Company 2 built in 1931 and served until 1999.
The Harvey could pump 18,000 gpm.
It famously came out of retirement to pump for 3 days during the
September 11, 2011 attacks on the World Trade Center.
It is now owned, operated, and preserved by a non-profit corporation.

Beautiful photo of lower Manhattan in 1948.
The fireboat "Firefighter", Engine 57, is seen alongside Pier 1 (lower left).
The Marine Division moved to Pier A (right of Pier 1) in 1960
Photo Courtesy of Al Trojanowicz

OLD MARINE DIVISION HEADQUARTERS
New York City, New York
Pier A at the tip of Manhattan on the Hudson River.
Home to active and reserve fire boats.
One of my favorite photos of the old
Fire Boat Station taken in 1986.

FDNY MARINE DIVISION
Pier A from the top of the World Trade Center
May 1990 photo
The "Wagner" and "Smoke II"
Pier A stopped being the Marine Division HQ in 1992.

THE FDNY MARINE DIVISION
The FDNY Marine Division at Pier A at the Battery in lower Manhattan
in the center of the photo.
October 1986 photo.

July 2012 view of lower Manhattan with the "re-building" of the World Trade Center
well under way as viewed from Marine 9 in Staten Island.

March 2015 view of lower Manhattan with the completed "1 World Trade Center"
aka "Freedom Tower" as viewed from Marine 9 quarters.

Also viewed from Marine 9 quarters is the "Statue of Liberty" with the
30 Hudson Street skyscraper and the George Washington Bridge beyond.

"MARINE 1 ALPHA"
Along with the 140' "Three Forty Three" Marine Company 1 operates
a 2006 27' SAFE fast boat equipped with a fire pump and able to get into areas
quickly for fire and rescue operations.

FDNY Fireboat - Old Marine Company 2
"John J. Harvey"
The old Marine Company 2 was built in 1931.
She served the city until retired in 1999.
Marine 2 was put into service for 3 days during
the September 11, 2011 attacks on the World Trade Center.

Marine Company 2
Retired in 1999 is now operated and maintained by a private
non-profit corporation that keeps the old boat running and
takes folks out for rides around the harbor.
Photos July 2011

Dazzled Marine Company 2
Check out the new "Dazzle" paint job on the "Harvey" since 2018.
April 2019 photos

FOR MORE ON THE HARVEY AND FDNY FIREBOATS
WWW.FIREBOAT.ORG
Find out how you can support the preservation of this great vessel
and maybe take a ride on her!.

FDNY Fireboat - Marine Company 3
In addition to the three main, full-time fire boat stations in the city,
the FDNY operates a few small boats seasonally at remote areas
of the city. The 27' Boston Whaler serving as Marine 3 operates
from a dock near the Kingsborough Community College in the
Eastern part of Coney Island in Brooklyn.

Additional boats operate from Ft. Trottin in Queens and
Great Kills Park on the south shore of Staten Island.

The newest of the FDNY Fire Boat Fleet was delivered to New York
in October of 2015 and christened on Friday November 20, 2015.

The boat was named for FDNY Deputy Commissioner
William M. Feehan, age 71, who was killed on Sept 11, 2001.
He had an extensive 42 year career holding all uniformed ranks
including Chief of Department.

FDNY Fireboat - Marine Company 6
"BRAVEST"
Built in 2011 by SAFE Boats in Seattle, Washington.
Marine 6 was trucked across county.
The 65' Fast Fire Boat is capable of traveling at 50 knots
and can pump approximately 7,000 gpm.
It is stationed at the Marine Division HQ in Brooklyn.
Photos July 2011

FDNY Fireboat - Old Marine Company 6
"Kevin C. Kane"
One of the smaller vessels of the FDNY, the "Kevin C. Kane"
was built in 1992 and served actively as Marine Company 6 until
2011 when it was replaced by the "Bravest."
The Kane is 52' LOA with a 6,500 gpm capacity.
As Marine 6 it operated out of Marine Division HQ at the
former Brooklyn Navy Yard.
Photo July 2011

Retired and disposed of 2016 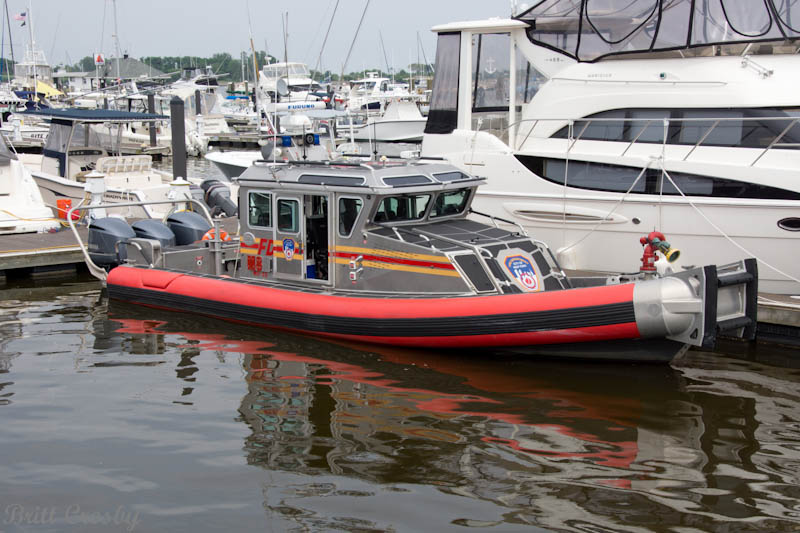 The Fire Fighter has retired
and a group is trying to preserve the vessel as a historical museum.
FIREBOATFIREFIGHTER.ORG

THE CITY OF NEW YORK WON'T HAVE HER

"Fire Fighter"
At the Marine Division in Brooklyn July 2011.

The "Fire Fighter" is currently located (2017) at the Greenport Maritime Museum
in eastern Long island.  It underwent a major hull repair and painting in 2017.
The original paint scheme of the boat as delivered in 1938 was restored
with a black hull.  The 501-C organization is trying to restore the vessel
so that it may last many more years.

"BIG BOATS"
The "Three Forty Three" and "Fire Fighter II"
are probably the two most powerful fire boats in the world today.
Blessing of the Fleet.
July 2011

"NYPD BLUE BOATS"
The New York City Police Department also operates a fleet of boats.
Some of them are shown in this feature.

Thank You!
Thanks to Bob who took the time to show me around the boats
at the Brooklyn Yard.